Pedagogy in education concentrates on the different learning styles of students. Every teacher knows that no two students are exactly the same, and so finding out how students learn helps the teacher create lessons that help each student learn in the way they learn best. There are several different theories as to how students learn. 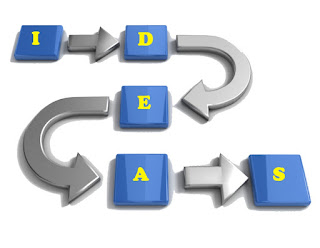 I.D.E.A.S : The Best Learning Design
I.D.E.A.S is the learning design that comprises of five levels. This learning design is based on the Muslim philosopher Ibni Tufail's philosophical novel with title Hayy ibn Yaqdhan (حی ابن یقظان) that was written in the early 12th century C.E. The name by which the book is also known include the Latin: Philosophus Autodidactus ('The Self-Taught Philosopher'); and English: The Improvement of Human Reason: Exhibited in the Life of Hai Ebn Yokdhan. The novel greatly inspired Islamic philosophy as well as major Enlightenment thinkers.
I.D.E.A.S is formulated by Sajid Mahmood Ansari inspired by Hay ibn Yaqdhan, that depicts five  levels of learning:Inspiration>Discovery>Experiment>Application>SalvationThis is the way how human learning proceeds.
Hayy ibn Yaqdhan is an allegorical novel in which Ibn Tufail expresses philosophical and mystical teachings in a symbolic language in order to provide better understanding of such concepts. This novel is thus the most important work of Ibn Tufail's, containing the main ideas that form his system.With this novel, Tufail focuses on finding solutions to the three main problems discussed during his period.
bn Tufail's Hayy ibn Yaqdhan had a significant influence on Arabic literature, Persian literature, and European literature after it was translated in 1671 into Latin and then into several other European languages. The work also had a "profound influence" on both classical Islamic philosophy and modern Western philosophy,and became "one of the most important books that heralded the Scientific Revolution" and European Enlightenment. The novel is also considered a precursor to the European bildungsroman genre.

The plot of Ibn Tufail's more famous Arabic novel was inspired by Avicennism, Kalam, and Sufism, and was also intended as a thought experiment. Ibn Tufail's novel tells the story of an autodidactic feral child, raised by a gazelle and living alone on a desert island in the Indian Ocean. After his gazelle mother passes away when he is still a child, he dissects her body and performs an autopsy in order to find out what happened to her. The discovery that her death was due to a loss of innate heat sets him "on a road of scientific inquiry" and self-discovery.

Without contact with other human beings, Hayy discovers ultimate truth through a systematic process of reasoned inquiry. Hayy ultimately comes into contact with civilization and religion when he meets a castaway named Absal. He determines that certain trappings of religion and civilization, namely imagery and dependence on material goods, are necessary for the multitude in order that they might have decent lives. However, he believes that imagery and material goods are distractions from the truth and ought to be abandoned by those whose reason recognizes that they are distractions.

Ibn Tufail drew the name of the tale and most of its characters from an earlier work by Ibn Sina (Avicenna). Ibn Tufail's book was neither a commentary on nor a mere retelling of Ibn Sina's work, however, but a new and innovative work in its own right. It reflects one of the main concerns of Muslim philosophers (later also of Christian thinkers), that of reconciling philosophy with revelation. At the same time, the narrative anticipates in some ways both Robinson Crusoe and Emile: or, On Education. It tells of a child who is nurtured by a gazelle and grows up in total isolation from humans. In seven phases of seven years each, solely by the exercise of his faculties, Hayy goes through all the gradations of knowledge. The story of Hayy Ibn Yaqzan is also similar to the later story of Mowgli in Rudyard Kipling's The Jungle Book.

Hayy ibn Yaqdhan dealt with many philosophical themes, especially in regards to epistemology. The thoughts expressed in the novel can be found "in different variations and to different degrees in the books of Thomas Hobbes, John Locke, Isaac Newton, and Immanuel Kant."

Ibn Tufail's Hayy ibn Yaqdhan was written as both a continuation of Avicenna's version of the story and as a response to al-Ghazali's The Incoherence of the Philosophers, which had criticized many of Avicenna's views. Ibn Tufail cited al-Farabi, Avicenna's Avicennism and al-Ghazali's Ash'ari theology as the main influences behind his work, as well as his teacher Ibn Bajjah (Avempace), Ibn Tumart, and Sufism.

n Hayy ibn Yaqzan, Ibn Tufail was also "the first author in the history of philosophy to ask himself the question" of the "conditions of possibility" of thought. He asked himself the questions "how does thought manifest itself" and "what is structure?"[ His answer was that "the most humble experience is already, by itself, structured like a thought."

A Latin translation of Ibn Tufail's work, entitled Philosophus Autodidactus, was first published in 1671, prepared by Edward Pococke the Younger, who had completed the translation prior to 1660. The novel inspired the concept of tabula rasa developed in An Essay Concerning Human Understanding (1690) by John Locke, who was a student of Pococke, and who referred to his translation as a "novelty"] Philosophus Autodidactus also inspired Robert Boyle, another acquaintance of Pococke, to write his own philosophical novel set on an island, The Aspiring Naturalist.

There were also two German translations of the novel, the first based on the Latin translation and the second based on the Arabic original.[25] One of these translations was read by Gottfried Leibniz, who praised it as an excellent example of classical Arabic philosophy. In Paris, Pococke's agent also wrote to him stating that he "delivered a copy to the Sorbonne for which they were very thankful, being much delighted with it.

For full details about Ibni Tufail's novel please click here.
Watch this animated movie to understand the concept of I.D.E.A.S  presented in Ibni Tufail's novel Hay ibn Yaqdhan. This animation is based on the said novel.
Email ThisBlogThis!Share to TwitterShare to FacebookShare to Pinterest