Message of all the Messengers 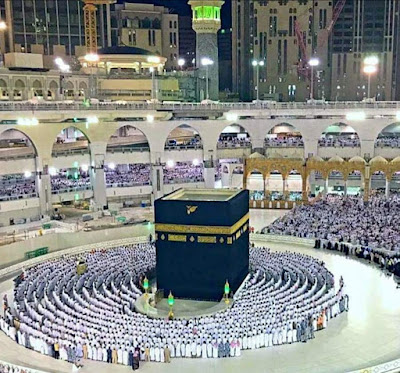 Islam is the religion that was taught by all the apostles of only God. Allah Al-mighty, the only God, says in His Divine Book Al-Qura’an:

“He has ordained for you of religion what He enjoined upon Noah and that which We have revealed to you, [O Muhammad], and what We enjoined upon Abraham and Moses and Jesus - to establish the religion and not be divided therein. Difficult for those who associate others with Allah is that to which you invite them. Allah chooses for Himself whom He wills and guides to Himself whoever turns back [to Him].” [Surah Al-Shura, 42:13]

While explaining this verse, the authority in Tafseer (Commentary on Qura’an), Imam Mujahid (Be His mercy on him) said that Allah Almighty taught same Deen (religion) to all the Prophets (May Allah shower His blessings and peace on all of them). [1]

“We ordained for you and the nations before you, establishing Deen (religion) and avoiding division; and enjoined to be united on following the footsteps of the Messengers.”

Muslims believe that every prophet preached the same main Islamic faith, the Oneness of God, worshipping of that one God, abstaining from idolatry and evil practices, and the belief in the Day of Resurrection or the Day of Judgement and life after death. The acts of charity, prayer, pilgrimage and fasting are believed to have been taught by every prophet who has ever lived.

The Prophets and Messengers are chosen and impeccable servants of Allah. They are taught, brought up and looked after by Allah Himself. They are free of every major and minor sins. They are descendants of the noblest and religious families and are so perfect in physique,
character, nature, intellect and wisdom that no scientists, scholar, physician and philosopher of the highest calibre can even think to compete with them.

By Sajid Mahmood Ansari - December 11, 2021 No comments:
Email ThisBlogThis!Share to TwitterShare to FacebookShare to Pinterest 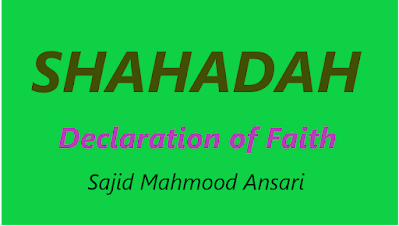 Shahadah refers to declaration of the fundamental Islamic faith that circles around the Oneness of Only God Almighty and the Prophe-thood of the last Divine Messenger Muhammad (PBUH). The literal meaning of Shahadah goes as follows:

That is, I confess and affirm with my tongue and heart that Allah Subhanahu wa Ta'ala is the Creator, Lord and Master of the universe. Nothing in the universe is hidden from Him. His Exalted Essence is beyond the Universe; the vastness of time and space cannot encompass His Essence. Everything has been created by Him except His Attributes. His Glorious Names represent His Essence. He is independent of all the things, while everything needs Him for its existence. He is not mere a perception, but the real God of the universe. He is unique and matchless with all His attributes. Nothing is comparable to Him. All the necessities for the survival of man and his life have been created by the Most Merciful and Compassionate Lord.  He is the Sovereign, the power of every gain and loss is in His hands, abundance and sustenance in provision, death and resurrection, honor and humiliation, disease and healing, suffering and relief, birth of children or Infertility is all under his control. What He wanted happened and what He didn't want didn't happen, so He deserves to be called upon in every difficulty, every need be sought from Him. He should be thanked for all the blessings bestowed upon a person and vows should be made in His name. He is not absent from anywhere, that is, His command is omnipresent everywhere, so He is worthy to be feared by Him and to use all one's abilities to please Him. May the utmost humility be manifested before Him and may the ultimate love be specified for Him. So He is worthy of all kinds of worship. No entity should be involved in His worship because no prophet, angel, saint, elder or other creature possesses any of the attributes of His divinity. Just as the universe is subject to His command, so it is obligatory upon every human being to obey His every command. His command is the law which is obligatory for all to follow.

Unlike ordinary human beings, he was free from animal lusts.  He is such a masterpiece of the most beautiful combination of light and matter that there is no precedent in the universe, so he is superior to all other creatures. He is the ultimate authority for the guidance in this world. Allah (swt)  blessed him with innumerable tidings and supernatural qualities which are called miracles. Whatever he prophesied under the guidance of divine revelation proved to be one hundred percent true in his time, while many of his prophecies are about to be fulfilled. He is the intercessor of the Day of Judgment. With the permission of God, he will ask God’s forgiveness for the people of Tawheed.

By Sajid Mahmood Ansari - September 29, 2021 No comments:
Email ThisBlogThis!Share to TwitterShare to FacebookShare to Pinterest